In the recent debate on tax changes in Germany following the proposal of the Green Party to increase tax rates to 49% from currently 42% for incomes of 80,000 EUR and above, the German Industry and Trade Chamber (DIHK) submitted an opinion piece which claims that increases in top tax rates correlates with an increase in jobless numbers. This opinion piece is an excellent example of two major abuses of statistics: Cherrypicking and confusing correlation with causation.

Their paper includes the following graph to illustrate the correlation between jobless numbers and top tax rate. 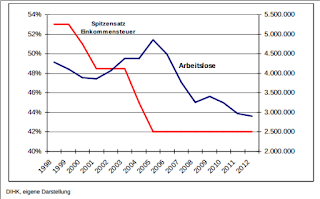 They claim that this shows that jobless numbers are positively correlated with the maximum tax rate and lags it by about five years.

There is absolutely no reason for them to pick this arbitrary time period of 14 years. I took the liberty to create a graph for a slightly longer period: 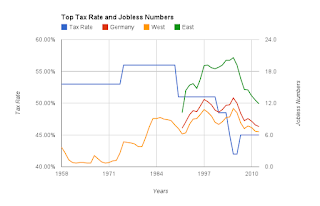 Jobless numbers have been fluctuating a lot in the last 30 years, completely unrelated to the changes in the top tax rate. There are rises in jobless numbers when the top tax rate does not change, jobless numbers go up or down after tax increases or reductions, and there is hardly any system to it. Indeed, if you calculate correlation coefficients, including a lag of five years, you get 0.25 for Germany as a whole, 0.19 for East Germany, and -0.12 for West Germany (including the historical data from 1958 onward).

The conclusion I would draw from this is that there must be other factors than the top tax rate that influence jobless numbers, and that the effect of the top tax rate, if there is one, is very small in comparison.