Do You Have a Weight Problem? (Weight Series Part 1) 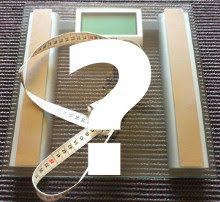 Obesity is quickly becoming a very prevalent condition in most western countries, and brings with it severe negative effects on health.[1] Consequently, health organizations are regularly recommending people to slim down. This in turn has made slimming down a whole business unto itself, with many groups trying to profit from it. The craze about slimming down has got us to a situation where advertisers post-process human pictures to depict them unnaturally slim, giving us unhealthy role models. There is even a problem with anorexia nervosa,[2] where people have such a fear of gaining weight that they reach extremely unhealthy low body weights.

All of this craze is accompanied by a lot of bad information repeated all over the internet. It does not help that the human metabolism is still only barely understood, so that accurate and good information is hard to come by, if it exists at all.

The true extent of the problem became apparent to me when even my doctor recommended to me a diet not backed by scientific data, and where the basic premises are simply wrong. This is a series on weight-related information I have found.

This first post in the series will try to answer the question of whether we are having a problem at all. Only if we actually do have a problem should we try to do something about it. Being underweight is as much a problem as being overweight,[3] so if you are not overweight, do not lose more weight.

The important indicator of whether a person has a weight-related health problem is the amount of body fat. Some body fat is required to be healthy, and both too much and too little are a problem. Healthy amounts of body fat are between 14% and 31% for women, and between 13% and 24% for men.[4]

Some types of body fat are more problematic for health than others. Abdominal body fat is considered especially unhealthy.[5] But in general, the body fat percentage is the best indicator of whether a person is healthy.

Probably the most prevalent method is the BMI, which is weight in kilograms per square meter (BMI = kg / m²). Both height and weight are generally measured in a clinical environment, and even at home they are easily obtained. Hence why the BMI is quite widely used.

It is an approximation only, though, and the World Health Organization (WHO) specifically says:

It can be used to estimate the prevalence of obesity within a population and the risks associated with it. However, BMI does not account for the wide variation in body fat distribution, and may not correspond to the same degree of fatness or associated health risk in different individuals and populations.

The problem of overweight and obesity[6, p. 9]

This shouldn’t be surprising. The BMI only uses height and weight as the basis of measurement, but we are after body fat quantities, which only correlates to some extent with height and weight (see below). Also, the approximation gets a bit off especially for very tall and very short people. Still, a study found that the BMI has a standard error of the estimate (SEE) of 5% for men and 4.6% for women.[7] This means that the BMI estimate for body fat is, on average, about 5% off. This makes it unreliable as the sole clinical diagnostic tool for individuals, but it’s still accurate enough to give an idea on whether you are in the “ok” range or in the “not ok” range.

The WHO defines an BMI of 25 as “overweight,” but there are studies that show that a BMI of 26 actually correlates with the highest life expectancy.[8] (Edit: This seems to be wrong and due to uncontrolled factors.) While being slightly overweight means a higher chance of weight-related illnesses such as diabetes, it also means a better chance of surviving stressful other illnesses and operations.

Furthermore, BMI values are not the same globally. The standard values used are for Caucasian populations, and especially Asian populations should use differing values.[9]

I want to emphasize here that the problem is body fat mass, not weight. Muscle mass is heavier than fat mass,[10] meaning that at equal weight and height, a person could be quite healthy with lots of muscle mass, or obese with lots of fat mass. Weight is not the primary indicator we are looking for, and losing weight is not the primary goal. But studies related to the BMI tell us that body fat mass and weight correlate well,[7] and few people have so much muscle mass that weight would be completely off as an approximation. It’s good to keep in mind that weight is only a secondary indicator, though. There can be times during a period of losing fat where you actually gain weight, but are still on the right track. On the other hand, if you try to use this argument to convince yourself that your BMI of 38 isn’t really that much of a problem, you most likely are just lying to yourself. 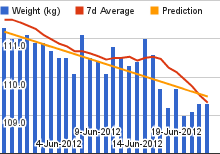 A main advantage of the BMI, despite all the drawbacks, is that measuring weight is pretty accurate for standard households. Body weight itself can vary between days, but the measurement error of scales is low. This makes weight a very useful tool for watching the progress of trying to lose fat, if you keep in mind that weight fluctuates somewhat by itself. The image to the right shows the progress of weight loss over the course of four weeks, losing a total of 2 kg in that time. All values are taken after waking up and going to the bathroom, wearing only shorts. This is about as accurate as you get in non-clinical settings. You can clearly see the daily fluctuations, but even just looking at the daily values you notice slow progress. The seven-day average makes the typical weight-loss curve very apparent, where you keep at some weight for a while, suddenly lose a chunk, and then keep at a certain weight again. And the regression line gives a nice downward progress at a slope of -0.065 kg/day, or about half a kg per week.

Modern household scales often come equipped with the ability to measure body fat percentage. They do this using a technique called bioelectrical impedance, which is based on the observation that muscle cells are better conductors than fat cells. The idea is to put electrodes on both of your feet, and using the impedance measured, calculate your body fat percentage.

This method has been used in a clinical environment for a while, but with a lot more care and not just two electrodes. Using only two electrodes at the feet makes the method quite inaccurate. A survey showed that even the best scales are off by about 5%,[11] meaning the measurement method is about as accurate as the BMI approximation. 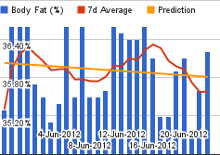 The image on the right shows body fat percentage development over the course of the same 28 days as the weight curve above, measured the same way. The body fat percentages vary much more erratically than the weight values, making it difficult to see any kind of trend here if I hadn’t added a regression line. Even worse, all values are within 5% of each other, so all the variations there could have been measurement errors, completely unrelated to weight loss.

I can see a use here to get an indication of possible health issues that helps balancing out the deficiencies of the BMI. But for watching progress during dedicated fat loss periods, I do not see how bioelectrical impedance measurement would be helpful.

A surprisingly accurate approximation of body fat for standard households is waist circumference.[12] As noted above, abdominal fat is the main problem, and waist circumference correlates with body fat slightly better than the BMI for men (R² of 77.8% for men vs. 67.0% for the BMI, as opposed to R² 70.4% vs. 74.5% for women).[7]

The risk of metabolic complications associated with obesity in Caucasians is increased for men starting at a waist circumference of 94 cm, 80 cm for women; it’s substantially increased for men at 102 cm, women 88 cm.[6] Again, there are no globally-correct cut-off points, they are specific to certain populations.

The drawbacks are quite similar to the bioelectrical impedance. The measurement is very easy to get wrong. Even a slight change in the way the measuring tape is held causes large differences in the readout. I’m not even sure the numbers I collected for my own progress are even remotely accurate. Simply following a different guide on how to measure waist circumference changed my result by over 5 cm (4.3%). I was not able to directly correlate waist circumference to weight loss in any way. Measuring waist circumference in large intervals did indicate that it is going down, though, so the method works. Measuring is just incredibly inaccurate.

So, just like with the bioelectrical impedance, I can see this method as useful to rule out BMI errors. It also seems to work for progress checks with large intervals like three to six months. For directly accompanying fat loss progress, I do not see the use.

To get better approximations for body fat mass, you need a caliper to measure skin fold thickness.[7] This is both much less reliable to do on your own and requires special tools most people won’t have at home, so I skipped those options.

Using our knowledge about the BMI, we can define a weight goal for overweight people using BMI = kg / m² ⇒ kg = BMI * m². For a target BMI of 26 and adding the 5% error margin mentioned above, you can calculate your weight goal below. If you are above this range, you almost surely need to lose weight. If you are within it, or below, you are doing ok.

Please do not forget that the BMI is an approximation only. It might get you wrong. If in doubt, ask your doctor. This tool uses a BMI of 25 and 26 as the overweight cut-off point. This is not applicable especially for Asian populations.

The BMI is an inaccurate tool, but accurate enough if you keep its deficiencies in mind. It is inaccurate in particular for very muscular, very small or very tall people. If in doubt, you can use waist circumference or bioelectrical impedance analysis to verify a BMI-based diagnosis. But it’s quite likely it is accurate enough for you.

If you have a BMI of 18.5 to 25, you are likely doing ok. If you are below 18.5, you need to gain weight (YES YOU DO, YOU ARE NOT SPECIAL; also no, you do not look good this way). If you are above 25, you should be careful that you are not increasing your weight much more. If you hit 30, you definitely need to lose weight. Otherwise, you are ok. Be happy with your body. It’s great. Likewise, if you have a waist circumference that is deemed ok for your population sample, you are ok. Ignore all advertisements telling you otherwise.

And if your doctor disagrees with this text, he is right, I am not.