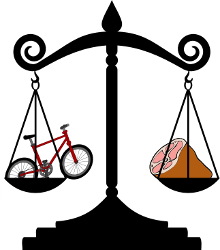 The question of how to lose fat is hotly debated. We have lots of answers, but they contradict each other, and it seems they are rarely based on actual scientific understanding. This is not surprising, as the human metabolism is extremely complex. Still, we do know enough to have at least some good ideas on how to do it.

This is the second post in my series about weight. In the first post[1], I talked about how to figure out if you have a fat problem at all. If you do not have a problem, there is no need to fix it. I also explained why weight is not necessarily the best indicator of having a problem, but it is quite close.

If you need to gain weight, go see a doctor. I’m not kidding, being underweight is a severe health risk and you do not look good that way, either. I can’t help you, though, I’ve never been in that situation and it hasn’t been the focus of my attention.

The rest of this text and most of the article series will be about losing fat and weight. More specifically, it is targeted at obese people who need to lose a lot of weight. Slightly overweight people might have different needs and priorities.

The one thing about weight and fat loss that seems to be commonly accepted no matter who you ask is the energy balance. A human body spends energy (expenditure) and consumes energy (intake). If you spend more than you consume, you lose weight. If you consume more than you spend, you gain weight. It is sadly not the whole story, and the details after that cause great contention.

The official unit for energy is Joules (J), but the commonly used unit all around the world is the slightly older calories (cal). When people talk about “calories” they usually mean “kilo-calories” (kcal). This can be a bit confusing, but as almost no one talks about calories, only about kilo-calories, it could be worse. I’ll stick with kcal here, too, because it’s what is used most widely. Apologies to the scientists.

The basic idea about the energy balance is simple. Your body consumes energy just to function, for example when resting. On top of that, it consumes energy for any physical activity. Add those together and you have how much energy you need to maintain weight. You get energy by eating and drinking. The question pretty much everyone needs to ask, though, is how much food we can eat so that the intake is lower than the expenditure.

There are various ways to measure your REE in a clinical environment, but sadly, few people have access to or the money for that. So just like with the BMI (see my last post), a lot of research went into finding equations that calculate the REE based on more easily attained measurements. For a long time, the Harris-Benedict equation from 1918 was in prevalent use, but due to changes the demographics, the old equation tends to overestimate REE (read: we’re all getting fatter and have to work less during normal days than in 1918). From what I found the currently best equation is the Mifflin-St.Jeor equation (MSJE) from 1990.[2]

While it’s always great to have such equations, we should never forget that it’s an approximation. The R² value of 0.71 of this equation indicates that weight, height and age alone do not explain about 30% of the variation in REE. The population this approximation was derived from consisted of only “normal-weight and moderately overweight men and women” (mean BMI of 26-27), and it is off especially for obese people, as the study explicitly states that “further studies are needed to more accurately predict the energy requirements of the obese population.”[2]

A small tidbit usually not mentioned when talking about the MSJE is that the equation was derived from weight values including normal street clothes except for shoes (p. 247). Assuming street clothes are in the range of 1-2 kg, the result is only 10-20 kcal off, so not much of a problem.

On top of the REE, a human consumes energy through physical activity. The sum of REE and physical expenditure (PE) is then called total energy expenditure (TEE).

To calculate that, the World Health Organization uses an Activity Factor (AF) which is defined by your Physical Activity Level (PAL). The WHO actually recommends allotting time of a day to sleep and various activities, and calculate the average activity factor from that.[4, chapter 5][4, annex 5]

Assuming we now have our Total Energy Expenditure, we should reduce that by some value to find how many calories we should consume to lose weight. There is some evidence that there is a maximum amount of fat loss per day based on fat mass[6], and also the plateau effect for heavy calorie loss mentioned below. I regularly see recommendations of the sort of “no more than 20% (or 25%) below your TEE,” “no faster than 1 kg per week,” and similar. I haven’t found good studies to make any of them more scientifically sound than the rest. Pick one you like.

But let’s look at what we are actually doing here. We calculate an REE which is about 22% off, and then multiply that with a simple factor that somehow represents our physical activity, and again with a semi-random factor to reduce some amount of it.

This does not strike me as particularly accurate.

So while this method can give a good starting point, it can not give you accurate values. Actual calorie intake should be adjusted steadily depending on your weight development. If you dislike equations, you can also just start out from a 2000 kcal diet.[7]

In theory, 1 kg of body fat is worth about 7700 kcal. I say “in theory” because this is at best a very rough approximation[8] and at worst grossly misleading[9]. But assuming this as an approximation, you should in theory need to expend 7700 kcal more than you consume to lose 1 kg in weight. That’s 275 kcal a day to lose 1 kg in one month. The exact numbers might vary, but the theory would be that there is a simple kcal value that defines how much more you need to spend to lose weight.

Sadly, it doesn’t quite work that way. There are multiple problems with this, beyond the criticisms in the articles above.

First, your body does not burn fat first when you consume less than you spend. I could not find good sources for proportions, even though lots of values are floating around, but it’s pretty clear that a negative energy balance consumes all of water, muscle mass, and fat mass.[10] Of those, you are only interested in losing fat mass. Losing muscle mass is actually counterproductive, as muscle mass increases your daily consumed energy. This is why losing serious amounts of weight should also be accompanied by dedicated strength training to counteract the muscle loss.

Second, there is apparently some kind of plateau effect[11] when losing weight. The exact causes are not really understood as far as I know, but the theories seem to revolve around a “starvation mode” the body goes into when the energy balance is negative, reducing the resting energy expenditure. This would make sense from an evolutionary point of view, your body is basically going into energy conservation mode, but well, we don’t know for sure. What we do know is that losing weight slowly seems to be more effective than trying a very hard drop. Slower rates of losing weight mean that you lose more fat mass per calorie you saved.[9]

Despite all of these problems and uncertainties, the basic idea of the energy balance is still the main basis for any weight loss. It just won’t be a linear loss, and that’s not just because reduced weight means a lower REE.

This calculator uses the Mifflin-St.Jeor equation to calculate your resting energy expenditure, then adds an activity factor of 1.3 to get your total energy expenditure, and then deduces 20% to get a diet goal. As mentioned above, this is an approximation only. Use it as a starting point and rough ballpark, not as the last word.

To lose fat, you need to expend more than you take in. It’s as easy and as complicated as that. To do this, you can start out with some calorie goal for your diet. As weight loss should happen slowly to avoid the “starvation mode,” you shouldn’t start out too low. Based on how your weight develops from there, you can adjust your diet. The next post in this series will be about this diet.

Additionally, as a negative energy balance means your body is also reducing muscle mass, not only fat mass, any serious weight loss should be accompanied with dedicated strength training to counteract this. A later post in this series will talk more about this.